Just in time for the cooler temperatures, USC Aiken's Impact and Rotaract Clubs collected socks as part of a growing "Socktober" initiative that takes place in some communities throughout October. In the end, the university's student organizations donated almost 850 pair of socks to the Salvation Army shelter in Aiken.

"We hope the socks donated will impact those who are receiving them during this cold-weather season," organizers of the sock drive said.

"Colder weather is approaching, and socks are an underappreciated necessity," said Ashley DeFore, a sophomore majoring in early childhood education.

"And it's awesome because [the Salvation Army Shelter employees] plan to give them out during Christmas time."

Both Impact and Rotaract are civic organizations, which involve multiple community outreach programs. The groups help partner Pacers with organizations throughout the area who nend volunteers.

Rotaract and IMPACT joined forces for Socktober this year because the organizers felt socks were an often overlooked necessity. They believe that while generous residents give myriad items to homeless neighbors, particularly this time of year, socks aren't always among them. The students wanted to tackle that and provide students, faculty and staff at the university "a tasteful and fun way" to get involved and give back.

"Ashley and I figured since no one really thinks about donating socks, and there is a homeless shelter located in our community, why not open this opportunity to the USC Aiken campus for the whole month of October," said Julia Smith, president of USC Aiken's Rotaract. 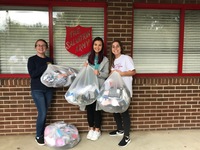 From left, Julia Smith, president of USC Aiken's Rotaract, Gracen Farr, and Ashley DeFore, student coordinator for the Impact, deliver socks to the Salvation Army. The trio organized a student-led donation drive at USC Aiken as part of Socktober. 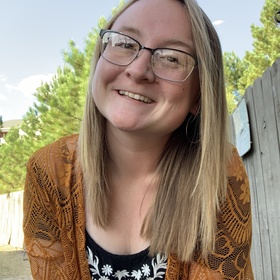