"It is my privilege to serve our student-athletes in this capacity," Jordan said.

"I look forward to working with other NCAA leaders to map out the future of this important aspect of our students' collegiate experiences."

According to the NCAA, the DII Presidents Council is the division's highest governing body. Those who make up the council set the strategic direction for every aspect of Division II, division finances, and the administration of championships. The chair of the council moderates the NCAA Division II Business Session during the association's convention. The Presidents Council is the primary sponsor of legislative proposals at the NCAA Convention.

"The council's deliberations and decisions shape Division II athletics," said Jordan who has served as a member of the council and chair of its finance committee for the last several years.

Currently, there are more than 300 member institutions within NCAA Division II, which includes 23 active conferences and approximately 120,000 student-athletes.

Last January, Jordan was also appointed to the NCAA Board of Governors. The Board of Governors is the highest governing body within the NCAA and oversees association issues across all Divisions. In addition to working with on NCAA leadership boards, Jordan is also the chair of the Peach Belt Conference Council of Presidents. 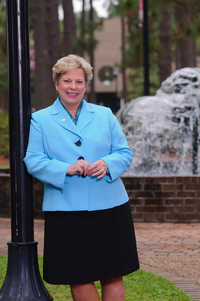