From the day she arrived on campus, she felt a sense of belonging and immersed herself in the opportunities at the University of South Carolina Aiken.

"USC Aiken immediately felt like a home away from home," Spurlin said.

"I felt that the family atmosphere, tight-knit community, and highly qualified faculty and staff were the best fit for me both academically and athletically.

The education major from Gaffney, SC, graduates in May with a concentration in English. She plans to earn her master's degree in curriculum and instruction. While she hopes to teach in a high-school setting, a doctorate may be in her future, according to the senior who has been named to the President's List every semester she's been at the University of South Carolina Aiken.

While she's maintained a perfect GPA, she's also been busy outside the classroom, both as a student-athlete on the volleyball team but also as a student-leader, serving as an orientation team leader and Pacesetter, critical jobs which help introduce new students to campus. Spurlin also represented the university as a Chancellor Ambassador, working closely with elected, business and civic leaders who support the university and with donors who generously share their resources to ensure the most engaging educational experiences for students.

In addition, she served in a variety of other capacities, including: as a Teaching Fellow, vice president of Sigma Tau Delta English Honors Society, treasurer of Kappa Delta Pi Education Honors Society, and a member of Omicron Delta Kappa Leadership Honors Society.

For her athletic prowess and educational achievements, Spurlin has earned the Peach Belt Conference's Elite 15 Award, been named to the PBC All-Academic team, and was selected as USC Aiken's Secondary Education Student of the Year.

Although she stays busy on campus, Spurlin makes time for her hobbies. She has coached volleyball to local youth, loves being outdoors, and enjoys spending time with her family. 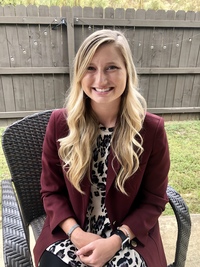