Aiken, SC (02/14/2019) — The University of South Carolina Aiken Student Government Association and Athletic Department invite Pacer fans throughout the area to join them for the basketball double-header against Augusta University, Feb. 27, in the USC Aiken Convocation Center.

During these basketball match-ups, USC Aiken students hope to break a school record by having the highest attendance for a home game.

"Breaking the school record in attendance during this year's USCA-AU rivalry game would be another signature milestone for USC Aiken Athletics and the serve as "icing on the cake" to any already historic season for the nationally ranked men's basketball team," said Brandon Eberl, SGA president.

"This year's "white out" game will continue a rich tradition in the long-standing rivalry series between the USC Aiken Pacers and Augusta University Jaguars and further enhances the game-day atmosphere for students and members of the CSRA alike," he says.

Burger King is the sponsor for the event and is making a limited number of white-out t-shirts available for students and fans during the game. Supplies are limited, however.

The Aiken-Augusta rivalry has gained a lot of momentum in the recent past, with the advent of the Battle for the Paddle rivalry. The friendly competition was inaugurated by students a year ago.

Each institution earns points when its university wins an athletic contest. At the end of the academic year, the one with the most points wins the paddle and bragging rights. USC Aiken won the series last year and aims to hang on to the trophy.

In addition to the game, the university is teaming up with the American Heart Association to sponsor a low country boil, which will be served between the games. A limited number of tickets will be sold for this fundraiser benefitting the American Heart Association. Tickets are $10. Tickets can be purchased at the game or in advance in the USC Aiken Wellness Center or Student Life Office, beginning Feb. 21. 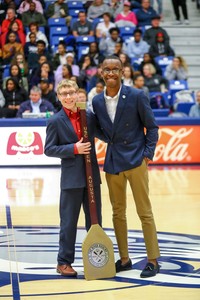 USC Aiken Student Government President Brandon Eberl, left, and his Augusta University counterpart, LeDarius Scott, have charged up the regional rivalry with the Battle for the Paddle competition. Eberl encourages all Pacer fans to help fill the USC Aiken Convocation Center for the annual USC Aiken vs. Augusta games, Feb. 27. Games start at 5:30 p.m., for the women and 7:30 p.m., for the men. Doors open at 4:30. All Pacer fans are asked to wear white that night to show their Pacer spirit.